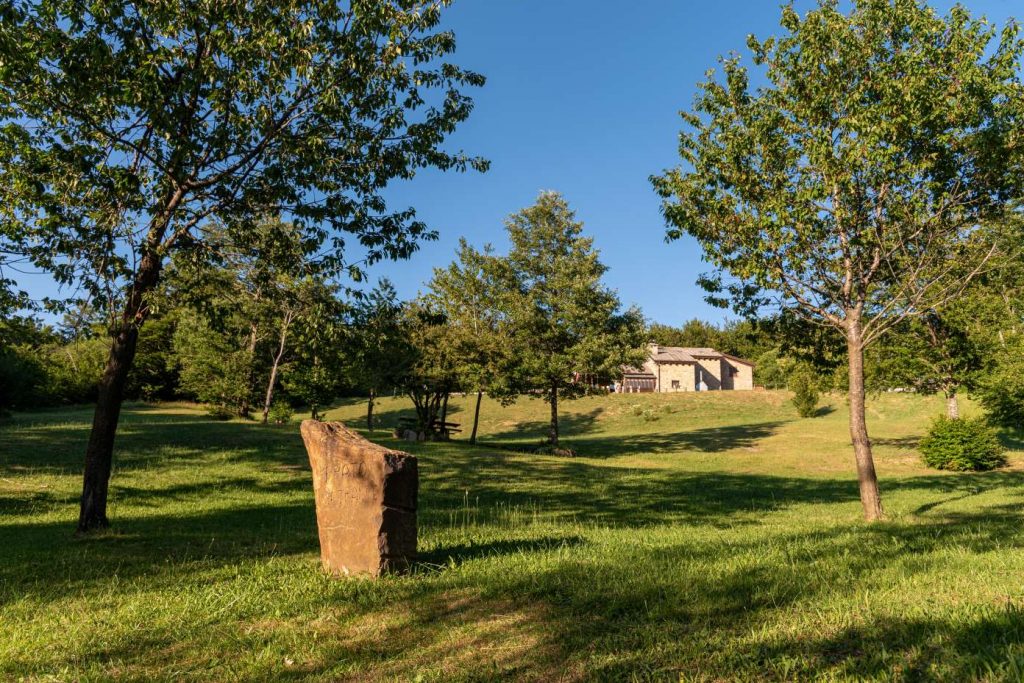 Monghidoro is a town in the upper Bolognese Apennines that lies on the border between Emilia and Tuscany. Its history is linked to its strategic position as a crossing point between the Po Valley and Central Italy. Pilgrims, merchants and soldiers of all origins have passed through Monghidoro [previously called Scaricalasino] for centuries.

It is an area of natural interest and offers various opportunities for walks and excursions to discover its natural beauty, religious buildings of historical and architectural interest and suggestive rural centres. Of note is the Alpe di Monghidoro (“Monghidoro’s Alp”) nature reserve that covers an extensive portion of the borough’s territory, starting in the upper valley at the torrent Savena and extending down into Tuscany.

It lies at an altitude of between 800 and 1290 metres of Monte Oggioli, on the peak of the Alps.

The natural vegetation is characterised by a forested area, consisting mainly of beech woods, ferns, old conifer reforestations areas and chestnut groves which contribute to the local excellence of the Bolognese Apennines with the “Blond Chestnut” (Marrone Biondo).

Numerous springs, ponds, wetlands, standing water pools and the Passeggere lakes can all be found in the area. Other valuable landmarks include the ingenious mills, built in a terraced arrangement along the course of the torrent Savena.

There is also a picnic area near Triton’s Park, a small adventure park.

Another area of naturalistic interest is “La Martina”, a natural park of 155 hectares, once characterised by meadows, fields and sparse oak woods. Since the 1920s, the area has been reforested with conifers (black pine, Scots pine, silver fir and Lawson’s cypress). An ancient copper mine can be found along one of the paths in the park. At about 770 m above sea level, there is a small hamlet of the same name that has just 8 inhabitants.

Walking along the streets in the centre of Monghidoro we find the church of Santa Maria Assunta dating back to 1256 but rebuilt in 1950 with the adjoining octagonal-based bell tower built shortly afterwards. Inside there is an exhibition of sacred art in the Don Bosco hall.

Also worth seeing is the Olivetan cloister of the cistern, part of a sixteenth-century monastery, which today is what remains of the Olivetan monastery of Ramazzotto.

You can also visit the Museo della Civiltà Contadina (Museum of Rural Life) which is located not far away in Piamaggio. It is conceived to show the visitor what rural life was like in the past, with reconstructions of household settings and a section dedicated to trades. Some tools and clothing of the time are also on display. One of the interesting features in the museum is that it houses a fully functional water mill built on a scale of 1:3.

A visit to the small ancient village of Sant’Andrea di Valle Savena, which houses a church of the same name built in the fourteenth century, is highly recommended. The building, which has recently been refurbished, is flanked by a unique closed portico. It contains some eighteenth-century paintings from the Bolognese school.

In the village of Campeggio you can visit the parish church dedicated to San Prospero, built in 1889, in which there is a reproduction of the famous “Grotto of Lourdes”. In the same place, there is also the ancient sanctuary of Madonna dei Boschi built in 1680 dedicated to the Blessed Virgin of San Luca, an image of which can be found inside.