It is a small medieval village lying on a crest between gentle hills covered in vineyards and ravines a few kilometres from Bologna and is considered one of the most beautiful in Italy; it has been awarded the orange flag (recognition of quality) by the Italian Touring Club 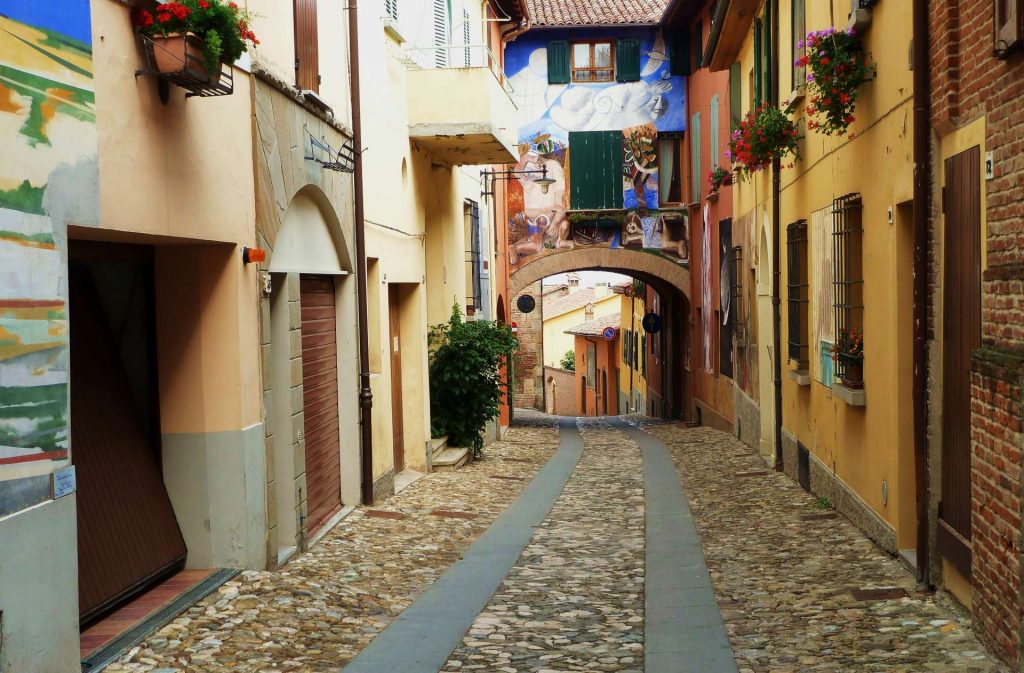 Dozza is a small medieval village lying on a crest between gentle hills covered in vineyards and ravines a few kilometres from Bologna and is considered one of the most beautiful in Italy; it has been awarded the orange flag (recognition of quality) by the Italian Touring Club.

Called Ducia by the ancients, after the ancient aqueduct that conveyed the water from the nearby Monte del Re to a cistern for the benefit of the local population, today the village preserves its history, art and local tradition.

Dozza has maintained its medieval urban layout and its historic centre lies within the old city walls along two tapering and narrow streets. In the upper part of the village is the imposing Rocca Sforzesca, a magnificent and immense historic residence which features a central courtyard surmounted by two loggias. It houses the Museo della Rocca (Rocca Museum) that contains the historic furnishings and 18th century paintings that belonged to the Campeggi and Malvezzi families, who lived in the fortress until 1960. Since 1970, the underground rooms have been home to the Enoteca Regionale dell’Emilia-Romagna, the ideal place to discover and taste the excellent wines from Emilia-Romagna, an area that has over 1000 labels from 200 producers in the region. Going up towards the Rocca tower, you can enjoy the panorama of the village and the surrounding hills. During the ascent you can admire Fyrstan, a dragon that rests imprisoned in one of the cells. He represents the guardian of imagination and creativity. He only wakes up during the days of Fantastika, the biennial of Fantasy Illustration, which gives life to the fantastic world through performances, lectures and activities. For lovers of the fantasy genre, there is also another place that can’t be missed, the “Tana del Drago” (the “Dragon’s Den”), the first learning centre in the world dedicated to John Ronald Reuel Tolkien, author of The Hobbit and The Lord of the Rings.

But Dozza is known among other things for being a boundless and timeless art gallery thanks to the Biennale of contemporary art of “Il Muro Dipinto” (The Wall Painting).

From the village there are also several hiking trails that cross the surrounding hills. One of these is the wine trail, a beautiful walk that connects four wineries where you can taste the local delights of the territory passing through enchanting landscapes.