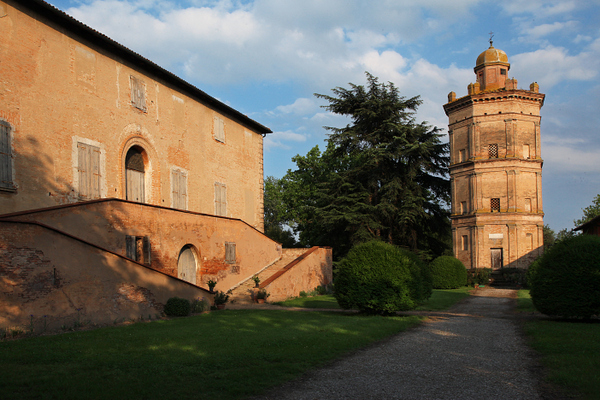 Minerbio is a town on the plains near Bologna dating back to Roman times, most likely named after the goddess Minerva.

Strolling along its streets, it’s easy to see how the Roman grid plan of the castrum still defines the village today. However, the town does have some characteristic structures from the Middle Ages too, recognisable in the city gate and the tower.

The heart of Minerbio is undoubtedly the imposing Rocca Isolani (Isolani Fortress), a historic 14th-century residence embellished with frescoes and decorations by the painter Amico Aspertini, which can only be visited during the Sagra Settembrina (September Festival).
Next to it is Palazzo Nuovo (New Palace), a mid-sixteenth-century building designed by architect Bartolomeo Triachini. Its facade features a characteristic loggia, which became a recurring theme in villas built in and around Bologna at that time.
Just behind Palazzo Nuovo, in the large rear courtyard, stands Torre Colombaia, a dovecote tower attributed to Jacopo Barozzi, called Il Vignola.

Continuing down the main road, visitors will reach the Chiesa di San Giovanni Battista (Church of Saint John the Baptist), whose decorative elements are quite impressive. Built in the 18th century, it was designed by architect Carlo Francesco Dotti, known for having designed the Santuario della Madonna di San Luca (Sanctuary of the Virgin Mary by Saint Luke) in Bologna.

By car: The town is just 10 minutes from the A13 motorway exit for Bologna Interporto.

By bus: From the Bologna bus station, take line 93 towards Mondonuovo.