Casalecchio di Reno lies between the plain and the foothills of the Bolognese Apennines not far from the regional capital Bologna and in the heart of the Reno river valley, from which it takes its name. 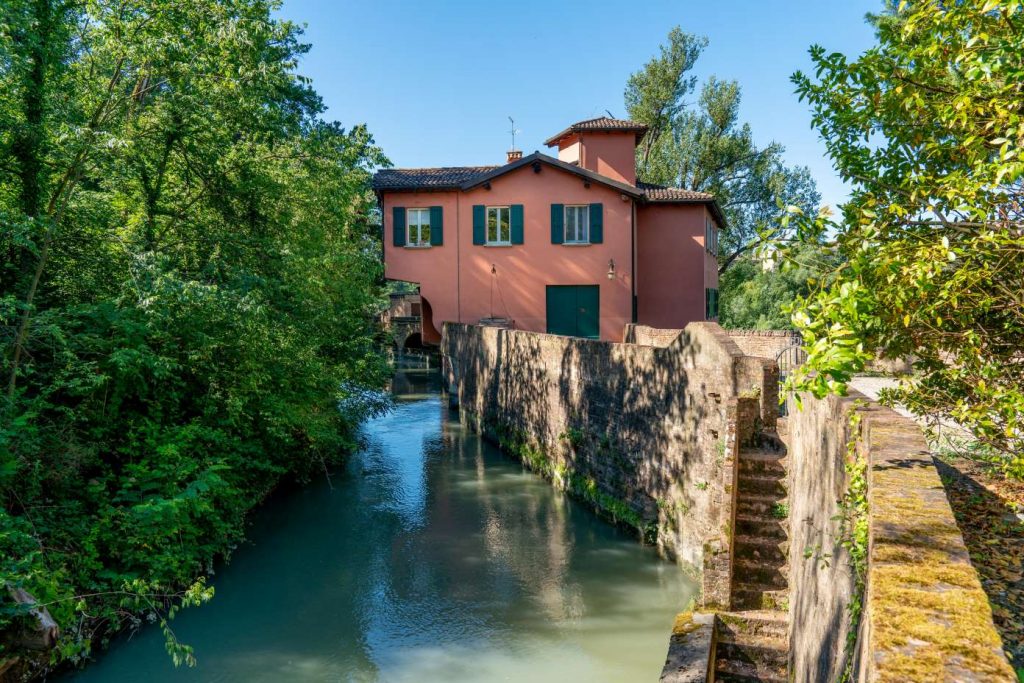 Casalecchio di Reno lies between the plain and the foothills of the Bolognese Apennines not far from the regional capital Bologna and in the heart of the Reno river valley, from which it takes its name.
Its name is of Roman origin: Casaliculum, which in medieval Latin means “small cluster of houses”. Human presence in the area dates back to the Palaeolithic and numerous artefacts have also been found that indicate that Villanovan, Etruscan, Celtic and Roman civilizations (the Roman aqueduct and the centuriation) inhabited the area.

The territory is dominated by Colle della Guardia on which the Santuario della Beata Vergine di San Luca is located, linked to the municipality of Casalecchio by the Path of the Bregoli, which starts from the huge Parco Talon. An enormous park full of paths that can be travelled along on foot or by bicycle. Two important trails, the Via degli Dei (path of the gods) and Via della Lana e della Seta (The Path of Wool and Silk) pass through the park.

Casalecchio is a crucial node for the Bologna water system as the Chiusa del Vignola (sluice) is found here. This is the oldest hydraulic installation in Europe that is still in continuous and uninterrupted operation. A cycle path runs alongside it that reaches the heart of Bologna. It was built in 1208 to provide power to the mills and factories of the city, as well as to supply navigable waterways used for international trade. It is now listed on the Unesco sites as Messenger of the Culture of Peace.

The Lido di Casalecchio, found along the river Reno, is a fully-equipped bathing establishment that offers a splendid view of the Sluice and the Reno river (not suitable for bathing). The area was created in the 1930s and today is a destination for rowing enthusiasts and lovers of outdoor sports, boasting a river-side gym, which is also equipped with a permanent area for slalom canoeing.
On the other side of river Reno, is the Eremo di Tizzano, a Bolognese Baroque style sanctuary from where you can enjoy a splendid view from its elevated position that dominates the vineyards of the Bolognese Hills.
Another church in the area, founded in the seventeenth century by the Martinian Friars, is the church of San Martino, for those coming from Bologna. With simple lines that are both classic and modern at the same time, in its current form S. Martino is quite a recent architectural style redesigned in 1926 by the Bolognese architect Edoardo Collamarini. It is dedicated to the patron saint of the municipality, celebrated on 11 November on the feast of the same name with traditional markets and the procession of lanterns.
Casalecchio also offers delicious culinary specialities, of which the “strichetto” stands out, a pasta similar to farfalle which also has a confraternity in Casalecchio, celebrated every year during the “Festa dei Sapori Curiosi” (Feast of Curious Flavours). A festival that every year offers various versions of a typical traditional dish.
Another gastronomic event usually takes place at the end of July, the “Artisan Ice Cream Festival”, during which the streets of the town are transformed into an open-air ice cream parlour.