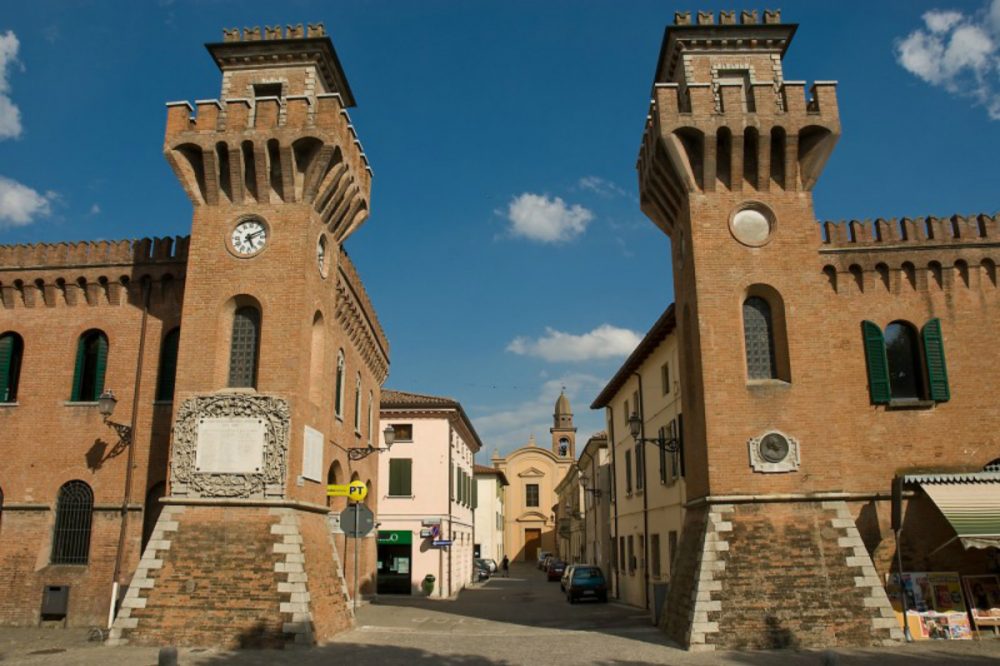 Mordano is a medieval village composed of two settlements: Mordano and Bubano. It’s the most easterly town in the metropolitan area. Surrounded by rows of grapevines, peach trees and beautiful natural landscapes, a cluster of many fine buildings embodies the rural architecture of Romagna and makes up a hamlet a few kilometres from Imola.

Entering the town, visitors will immediately notice the Due Torri (Two Towers) that create a sort of entry wing to the old fortified centre of Mordano. Replacing the old city gate, the towers were built in the late 19th century based on the designs of engineer Giovanni Brusi, who was inspired by the towers of the Arsenale in Venice.

Continuing down the road, visitors will come to the 18th century church dedicated to Sant’Eustachio (Saint Eustace). It was built in 1766 and is composed of a single nave with three chapels on each side, six altars all in scagliola plaster, each one different than the next. The church is important because it holds an image of Our Lady of Graces: this large fresco on a block of sandstone weighing almost 300 kilograms decorates the apse of the main altar.

It is also possible to visit the Convento di San Francesco (Convent of Saint Francis), which was built atop the remains of an even older convent, the first Christian worship site in the area, probably built before 1000 BCE by Benedictine monks.

By car: From Bologna, take the A14 motorway and exit at Imola. Follow the signs for Mordano that appear after a few kilometres.

Train + Bus: from Bologna Central station, take the train in the direction of Rimini. Alight at Imola. From the railway station, walk for 350 meters to the stop of the 151 Poiano bus. Take it in the direction of Lugo Garibaldi and alight at Mordano. (The same bus can also be taken from the Imola bus terminal, which is on the same street as the railway station, Via A. Costa, just 200 m. away.)